By Graeme StevensJanuary 24, 2020 No Comments 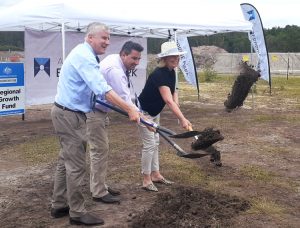 The first sod has been turned to mark the start of construction of the Coffs Harbour Airport Enterprise Park today after the Coalition Government delivered $10 million for the project.

Federal Member for Cowper Pat Conaghan said the multi-use enterprise park, owned by Coffs Harbour City Council, would encourage businesses to relocate to Coffs over the long-term and provide opportunities for existing enterprises to expand and prosper.

“Investing $10 million in this great enterprise precinct will see its roads, drainage and services built so that business tenants can take up a position in the 98-lot development,” Mr Conaghan said.
“This new enterprise park, along with other major improvements our Federal and State Governments are delivering such as the Coffs bypass, will help to set up our city for the future.”

Deputy Prime Minister and Minister for Infrastructure, Transport and Regional Development Michael McCormack, who visited Coffs Harbour today, said the funding was another example of the Nationals in Government delivering for regional communities.

“This investment will create jobs throughout the North Coast during the construction of roads, drainage, water, sewer, electricity supply and telecommunications services, landscaping, street lighting and earthworks at the 43-hectare site,” Mr McCormack said.

Coffs Harbour Mayor Councillor Denise Knight said the Enterprise Park will boost the local economy and establish another sustainable economic asset for the community. “With the ink now dry on the Grant Funding Agreement, this is an exciting time for the city. The new Enterprise Park is targeted at bringing new businesses, new opportunities, new families and new jobs into the region,” Ms Knight said.

The Federal Government’s Regional Growth Fund has so far provided 17 grants of $10 million or more to councils and organisations throughout Australia for transformational projects that support economic growth.

This project will construct the full 98 leased lot development on 43 hectares of vacant land strategically located next to the busy Coffs Harbour Airport. For more information on the Regional Growth Fund visit the website.